Unexpectedly fantastic episode. From last week’s trailer I was worried that The Crimson Horror would be just be hammy and silly. However, I had forgotten that it was from the beautiful pen (because I can only imagine him to have beautiful pens) of the wonderful Mark Gatiss. Although by no means perfect, it was chilling, entertaining, funny and well just about everything you want from a Doctor Who episode. This is one that I will enjoy going back to watch as a standalone episode that also helped to move the story arc along. I doth my bowler hat to you in gratitude Mr Gatiss. 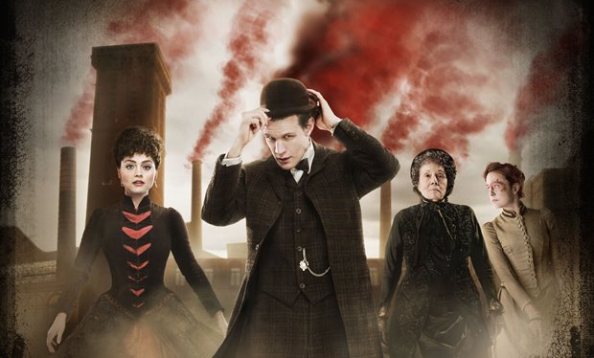 This week’s romping mystery saw Vastra, Straxx and Jenny being hired by the brother of a victim of the crimson horror, a strange affliction that somehow kills you and makes you look like you have really bad sunburn. The victim was himself investigating the disappearances of believers who had joined a religious factory commune in Yorkshire called Sweetville. The commune is lead by the charismatic doom-monger Mrs Gillyflower (Diana Rigg) who use her own blinded daughter Aida (Rachel Strling) to demonstrate the consequences of sin. Jenny infiltrates the commune, discovers that the factory is fake and the Doctor has somehow caught the crimson horror but it has failed to kill him and he is locked in a cell.

After the Doctor cures himself he explains that he and Clara had teamed up with with the threesome’s client’s late brother to investigate Mrs Gillyflower. He reveals that Sweetville preserves its most fit and beautiful applicants and the ones who fail the preservation  process get the crimson horror and are thrown “in t’ canal”. They rescue Clara and set about stopping Mrs Gillyflower from, with the help of Mr Sweet, killing almost everyone on Earth. Mr Sweet, it turns out is a gross prehistoric red leech who lives symbiotically on Mrs Gillyflower’s chest (thank you Mr Gatiss, that really was lovely). With the help of Aida, who saved the Doctor from being thrown in to the canal and who was experimented on by her mother, they stop the apocalypse in time for some lovely Yorkshire tea.

This episode also contained a postscript that was a set-up for next week. The children who Clara is the nanny for discover her time traveling secret and force her into promising to take them with her. I am really not fond of the idea of children in the TARDIS but I will remain open-minded until I see the episode.

The plot itself weaved wonderfully around mysteries that kept me guessing and pleasantly surprised. Things that I did not expect were the vacuum sealed Adams and Eves in waiting, the fake factory with gramophone noise effect, the stomach churning appearance of Mr Sweet and just how close he and Mrs Gillywater really were. I also really liked the religious zealotry in the motivation of the villain’s desire to destroy the world to create a paradise. This both alluded to the Eugenics movement that begin in the year this episode was set (1883 was the year Eugenics was given its name) and the horrors of fundamentalism.

I mentioned before that the episode was not perfect and what I didn’t like was the unnecessary Thomas Thomas/TomTom joke,  the grainy effect that was used for the flashback and the  fact that it wasn’t well explained how the red leech could show Mrs Gillyflower how to build a huge rocket with only a handful of helpers. However, these are only minor points that don’t spoil what was definitely the best episode for a long time.

‘Nightmare in Silver’ – Neil Gaiman is back and so are the Cybermen. I have picked up an interest in cybernetics and body modification recently so from the trailer it looks like this episode will feed my current obsession. It is also set in a creepy dilapidated theme park world – in the hands of Mr Gaiman, I’m struggling to see how this could go wrong.

The Art and Craft of Blogging

The latest news on WordPress.com and the WordPress community.

Science Fiction and Other Suspect Ruminations

Reflections of a Book Addict
digiphile

We're already living in the future. It's just not evenly distrbuted yet.

Frivolous Monsters: a journey into the unknown
Funk's House of Geekery

Editor in Northern California. Interested in tiny things, nineties nostalgia, old jungle mixtapes, punctuation, and my cats. Not to be fed after midnight.

News website covering current affairs and the arts. Written by young journalists, for everyone.

A blog from the deep South of Halifax