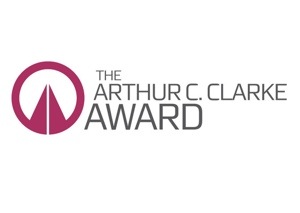 Last night was the first time the Clarke Award was open to the general public. Tickets sold out fast so here is a review of the night from a fan’s perspective for those not lucky enough to get one.

The night started with 250 geeks, nerds, writers and boffins filtering themselves into a large lecture hall in the beautiful Royal Society building off Pall Mall in London. I went just as a fan with some of the members of the Science Fiction Book Club and Postapocalyptic Book Club and we chatted through our excitement of the upcoming night.

When the event itself started it was with an intellectual bang – a panel discussion that glided around designing the ecology of a living spaceship, detecting gravitational wave direction, mathematically modelling visual illusions and virtual reality torture from experts in these unusual and fascinating fields.

We then had speeches to build the tension. At some points that tension was a little drawn out but once the head judge stared his run through the book descriptions the room went silent everyone felt the climax of the prestigious award was close.

Professor Ian Stewart of the science of Diskworld fame came to the stage with the envelope that felt like the most important piece of paper in the galaxy for the 10minutes he took to expound upon be importance and meaning of the award and Clarke himself.

Quite abruptly, Professor Stewart opened that pregnant envelope. And the winner was … Chris Beckett for ‘Dark Eden’. There was a screech from the audience at the announcement and Chris came up to collect his award. His speech was wonderful and included the memorable “I was a solitary child who spent his time reading and writing indoors. The other children might have got other things like healthy fresh air but [brandishing the award] have they got one of these? Probably not!” 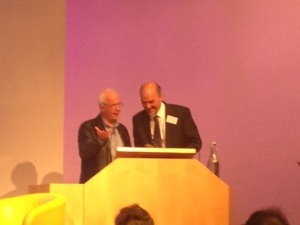 The post announcement drinks reception were an interesting affair filled with mainly people from publishing houses, writers and organisers of geek groups such as the Sci-Fi Society. As someone who was there just as a fan this was an odd experience as networking events are when you lack a networking motive.

There were murmurings of displeasure from the literary agents about the panel discussion that they might normally appreciate but not when they give up their evening for what for them was work. However, overall there was a positive buzz as the free wine was downed in the hallowed halls surrounded by portraits of the great scientists of old.

After being very politely thrown out of the Royal Society a hundred strong party left for the pub and I got to spend time speaking to the winner, his lovely wife and the editor of the book. I hadn’t thought I’d get this opportunity to talk with these guys at such length but hey, when you throw yourself into the Clarke Award evening, odd things can happen.

I’m confident that next year they will find a stronger balance between appealing to the literary agents and the general nerds so when the 2014 Award comes around I would advocate every sci-fi fan try to get a ticket. It will be a tough race and you will have to beat me to one first.

One thought on “Geek gathering – An evening at the Arthur C. Clarke Award”

The Art and Craft of Blogging

The latest news on WordPress.com and the WordPress community.

Science Fiction and Other Suspect Ruminations

Reflections of a Book Addict
digiphile

We're already living in the future. It's just not evenly distrbuted yet.

Frivolous Monsters: a journey into the unknown
Funk's House of Geekery

Editor in Northern California. Interested in tiny things, nineties nostalgia, old jungle mixtapes, punctuation, and my cats. Not to be fed after midnight.

News website covering current affairs and the arts. Written by young journalists, for everyone.

A blog from the deep South of Halifax